What is Dry Fog? By AeroScience Ag Products 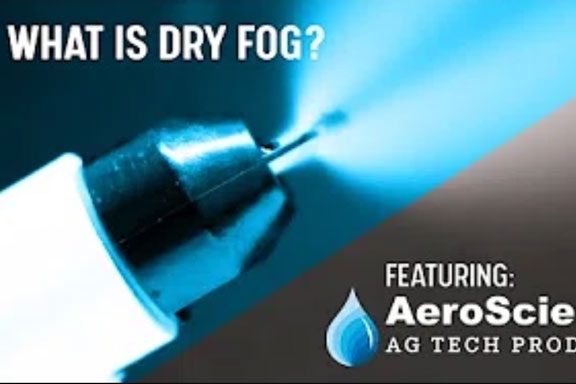 HI, I’m Josh Serpa, and I’m the founder and CEO of AeroScience. We’re an Ag tech company that focuses on water conservation products for agriculture. I’m the inventor of the micro fog atomizer, and a number of other products.

What is Dry Fog?

So, what is dry fog? In order to understand what dry fog is, you have to understand what a micron is. Now, a micron is extremely small. If you took a millimeter, and you cut it into a thousand parts, one of those parts would be one micron. So, dry fog is zero to ten microns. And just for reference; a human hair is around a hundred microns, and it’s hard for the human eye to see below thirty microns. So, dry fog is zero to ten microns, and it’s extremely small. And it evaporates, so when Dry Fog gets into the air, it evaporates and changes the moisture content of the air.

Zero to ten microns is what we focus on—that dry fog range. fog is bigger—it’s up to thirty microns—and mist goes up to around a hundred microns. And the spray can be up to… say, 250 microns. And that’s beneficial, because at zero to ten microns, you get complete coverage. Also, microbiology, specifically microbes, are around one micron—and our water droplet size is around eight microns. So, our water droplet can deliver microbiology to plants, and that adds a lot of benefit. So, dry fog again is zero to ten microns in size, and it evaporates into air.

What is the Microfog atomizer?

So the key product at AeroScience is the Microfog Atomizer. This new version, made out of carbon fiber, is about 75 percent more cost-effective. This dry fog Atomizer takes compressed air and water and makes a zero to ten-micron dry fog. Our actual dry fog droplet size is around eight microns, and that’s beneficial because fungal spores if you’re spraying those in, are three to five microns. So, this product right here is the key to AeroScience, the Microfog Atomizer.

Dry fog’s used in hospitals to sterilize surgery rooms, to kill molds and bacteria, and viruses. You have to put something into the water in order to make dry fog a sterilization media, but it can be done.

Dry fog is used in greenhouses and also in HVAC systems to cool the air. By adding dry fog to the air, it evaporates and lowers the temperature of the air.

Dry fog is really good at increasing humidity in air. It’s used in greenhouses, and it’s also used in wine barrel storage rooms to keep the barrels from cracking or drying out.

Dry fog is extremely efficient at coating the leaf surface, so dry fog nozzles can be used at a greenhouse to automate the foliar spray process.

The two main reasons being that:

Not many delivery systems can do that, but dry fog can.

What Are the Benefits of Dry Fog?

So, there’s some major benefits to dry fog, and I'll talk about it here:

By using dry fog nozzles, you can automate a lot of the processes in your greenhouse, or in your indoor room. Since the nozzles are driven by compressed air, it allows for an easy way to control the automation process.

You can lower your labor costs. By automating the foliar spray process or the humidification process, you’re going to lower the amount of labor costs that you have for your greenhouse growth.

You’re going to reduce the health risks to your employees, because they’re not going to be in the space spraying on organic pesticides, or anything like that: it’s all automated, so there’s no health risk for your employees, which is actually a big factor; it’s a major cost.

Use dry for to lower your integrated pest management costs (IPM), so all those expensive microbiologicals and things you might be spraying on your crop, you’re going to reduce the amount of substances that you’re going to use.

Lower the cost for the actual fertilizers that you’re using in an aeroponic system.

Basically, the vapor pressure deficit is a complicated thing, but with dry fog you can control that as well.

So those are the seven benefits I see for dry fog.

AeroScience has some new products for 2020:

We’re also working on a really cool project called, The Aero Tray, which is a fully integrated, dry fog aeroponic system. That will be available through Monster Gardens online, so check them out online! And thanks for watching!

What is Dry Fog? By AeroScience Ag Products April 3, 2020
Latest