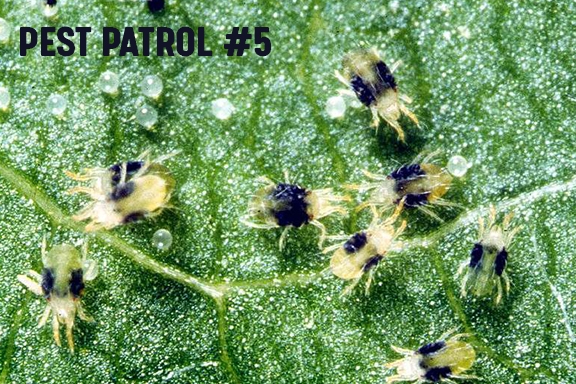 Knowing your enemy is the first step to defeating your enemy so we’ve provided all you need to know about specific pests in our series within a series, “Knowing Your Enemy”, inside and out. Our second creature is the spider mite.

Though quite opposite in stature from the nightmarish creatures featured alongside David Arquette in the 2002 gem, spider mites are equal in the havoc they wreak on your garden. In fact, one reason these pests are so dangerous is their incredibly small size — they are very hard to detect before it’s too late. Spider mites can be smaller than 1mm in size, making them almost impossible to see individually with the naked eye.

Spider mites are not actually insects but belong to the eight-legged Arachnida class, along with spiders and ticks. The species most likely to be in an indoor garden is the Tetranychus urticae or “two-spotted spider mite”. These guys have oval shaped bodies, with two dark spots and though also referred to as “red spider mites”, they can vary in color from yellow to green, or brown to red, or appear translucent. Spider mites, like fungus gnats, reproduce and move through their life cycle at a rapid rate, so understanding this cycle is key to containment.

Egg: Female mites will typically lay clusters of 20 or so eggs on the underside of leaves and spin webs around the area for protection. Though these eggs might look like microscopic water droplets, they are incredibly durable. They resist most attempts at eradication and can even remain dormant in colder temperatures (adults can actually do the same) waiting for more appealing conditions to hatch. At temperatures around 75°F (24°C) or above, the eggs will hatch within 3-5 days and larvae will emerge.

Larval and Nymph: Spider mite larvae surface from their eggs with just 6 legs but with an insatiable appetite for their host plant. Mites will stay in this stage until they have devoured enough of the plant to transition into the nymph stage, where they acquire the final two legs. The larval and nymph stages combined take about 5-9 days.  After one last molt, the nymphs transition into the adult phase of the cycle.

Adult: A fully formed adult is ready to reproduce. Male spider mites emerge from unfertilized eggs while fertilized eggs become female at a ratio of about 3:1, male to female respectively. An adult spider mite will live approximately 2 weeks during which time a female can lay hundreds of eggs.

It’s easy to see, with such a fast turnaround from egg to adult, how quickly an infestation can get out of hand. The total life cycle of spider mites can be completed in just over 2 weeks. Even worse, in ideal conditions, i.e. temperatures above 80°F (about 27°C), this can happen in as short as 7 days! Knowing what conditions spider mites like, don’t like, and where to find them is wholly necessary to keep these little critters under control

Walking in a Spider Web ... and It’s Hot in Herre:

Spider mites absolutely thrive in hot, dry conditions. In fact, in said conditions they can live twice as long. Unsurprisingly, spider mites are a problem in the summer months, as the warmer temperatures speed their reproduction rate and thus their abundance. Mites are also a problem for indoor gardens and greenhouses in the cooler months. Though these places tend to be more humid than they prefer, inside is much warmer and better suited to proliferation than the cold outside winter world, and thus much more appealing.

Spider mites are resourceful little suckers; in the wild they use their webbing to catch gusts of wind to glide from plant to plant. Outdoors and well as indoors, mites use their webbing as a super highway to get around the initial host plant as well as move to any others in close proximity. When not on the move, they tend to dwell on the underside of leaves, in colonies, near their precious eggs. So, we know they like heat, we know how they get around, how do we know if they’re here?

As you may have guessed, one of the most obvious signs of a spider mite infestation is the presence of webbing on your plants. These webs will look quite different than the delicate individual strands of your typical spider, a garden friend rather than foe. Spider mite webs typically begin on the underside of leaves, where the mites hangout, and stretch across the leaf in a tent like structure, sometimes even covering whole flowers or even whole plants. Thick webbing almost always indicates the presence of eggs and therefore a new generation in waiting.

If you’re concerned spider mites may have entered your garden but do not yet see any webs, check the underside of the leaves. If mites are present, it may appear as though the leaf is coated in a layer of fine dust. However, look closer and you will notice this dust is composed of tiny moving dots. Here again a hand lens is a great tool for any garden. It will allow you to be sure you are seeing spider mites rather than other similar sized insects such as aphids and thrips, and treat accordingly.

Sadly, detecting spider mites before any damage has been caused is nearly impossible; noticing the presence of mites through their damage is much more likely. Impeded or abnormal growth as well as overall poor plant health can indicate a spider mite problem, but also a number of other problems. Look specifically for leaves stipulated with tiny 1-2 mm spots. These spots are actually sunken cells caused by the mites feeding on the juice inside. As the mites continue to feed, the spots will grow and brown eventually causing the entire leaf to shrivel, die and drop from the plant. If left untreated, spider mites can wipe out a plant in just a matter of days. So, what is it about these tiny creatures that make them so incredibly destructive?

Leaves play an indispensable role in maintaining plant homeostasis by regulating moisture retention and transpiration. This is controlled through the stomata, which open and close in response to how much moisture the plant needs per its particular environmental conditions. Effective moisture regulation is an intrinsic part of plant vitality and this is exactly what spider mites attack.

You can think of spider mites as vicious plant-vampires who feed by puncturing cell walls, sucking out the fluid inside and leave holes in the once waterproof casing. This in turn puts the plant under the impression it must close its stomata to preserve moisture. Sadly, the holes caused by the mites make this act completely futile; the moisture still escapes. The loss of vital fluid, stolen by the mites, weakens the plants ability to photosynthesize and repair itself, stressing the plant out and stressed plants produce cell sap that is sweeter and even more appealing to spider mites. This is why spider mites are so destructive. They attack plants that are vulnerable, making them even more vulnerable, which attracts even more mites who will, if unchecked, continue to eat away until there is nothing left. Talk about an unhealthy relationship.

Fortunately, in our “Prevention” article we’ve already covered the many ways to pests from getting out of hand in our gardens before they’ve had the chance to crush our harvests … and our hearts. We’ve also discussed how to deal with the issue and recover in our “Elimination and Restoration” article so if you haven’t checked these out yet, please do! Check back for the next edition of “Knowing Your Enemy”.  ‘Til then! - Monster Gardens U, the source for all you need to know for a monster grow!